Princess Mononoke is the first Ghibli film I have ever watched (Yeah yeah, call me uncultured for not even knowing the storyline of Totoro!), and it's absolutely gorgeous. The visuals, while necessarily with less parallax due to being hand-drawn, is easily readable and a sight to admire. And while the storyboarding might be weird to follow, I don't have a lot of problems keeping track of what's going on. Most importantly though, the film also touches on many philosophical questions - classical Ghibli style. In addition to godhood, it asks us to look back at those neverending conflicts - and how silly they seem now.

How gods work in Mononoke

The gods (or spirits or youkai or kami or whatever) in Mononoke are very similar to those from my universe - likely because they stem from the same idea. There's a god representing everything from a forest, a village, to occasionally an oddly large tree, and those gods are merely higher-level beings than us - they still have emotions, hatred, bias, and a body which can die.

However, they did have one thing going for them, and that's the corruption. 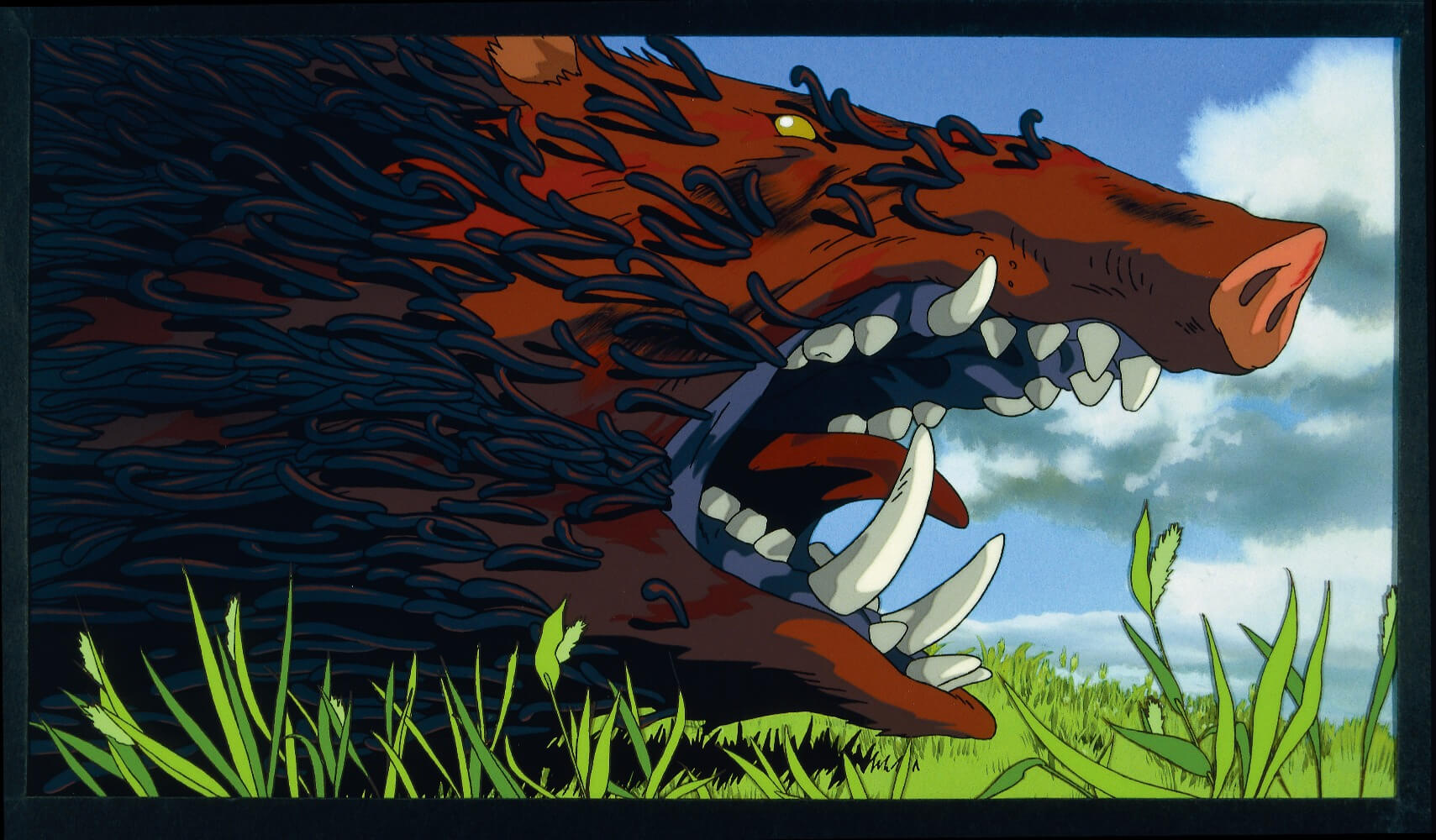 A killed god does not simply collapse into a heap of flesh - the hate and madness consuming the end of their lives manifest into physical form, turning the being into a destructive beast. So trying to take one's life would only get yourself hurt, get places destroyed, and possibly put your own life on a countdown. Gods in my universe don't have this mechanic, but they (or rather humans) are isolated enough to not get into trouble.

This system worked really well, aside from a particular city dedicated to going past the limits...

The Iron City of Hope

Irontown is one of the most innovative settlements in-universe. Not only are its ironworks and guns the envy of the land, females also have a major role in the community - something unheard of at the time. Infected people, shunned as cursed by their hometowns, find themselves here able to work for the greater good. Prostitutes forced into their occupation are rescued and finally can pick a better job for themselves.

And running all of this is our antiprotagonist, Lady Eboshi.

Eboshi is absolutely badass. Tradition? We don't do that here. The Emperor? What can he do with us here anyway? Gods? Just a couple shots and they'd all be running away.

Irontown's iron deposits are the lifeline of the city, and the existing sites are running out. However, there's a lot more iron below the mountains waiting to be extracted. Two things are standing between Eboshi and the prosperous future of her empire - a bunch of trees, and a hoard of gods ready to defend their home at any moment.

From up here, things look simple. Irontown's lifeline is the deposits under the trees, and the Forest's lifeline is, well, the trees being alive and upright - too bad the two happen to be in the same location.

But down there? Not so much.

Just like how Eboshi sees the gods as "just pests to be gotten rid of", the gods see Eboshi (and, by extension. all humans) as greedy clusterfucks who loves destroying their home. Both the gods and humans are fighting for what they deserve, and by extension, sees the other side as just plain "wrong". They don't even see each other as individuals anymore; What happens the first time San and Eboshi met? They tried to murder each other.

And they probably would have, if there wasn't a philosophy lecture delivered at the ring.

A messenger from afar

Ashitaka came to Irontown from another region, initially to find a way to cure his curse. Being an outsider to this whole thing, he has no idea what's going on with all the infighting - In fact, when we first saw San solo-raid Irontown, Ashi tried to get her to explain the situation. He also wants both Irontown and the Forest to stay afloat - in the endgame, he took matters into his own hands, notified Eboshi of the overwhelming Samurai attack (which she promptly ignores), and warned the Boars about the mine traps (which the leader also promptly ignores).

Of course, every politician knows that if you're not full-Right, you're definitely a Left. Irontown seems to be really adamant at classifying Ashi as a "wolf" or a "town" - the instant he was meddling with the Wolves, he's deemed a Wolf. All this doesn't matter, however, as Eboshi was about to take the head of the God of Life and Death, Shishi, to greatly please the emperor.

Everything collapses around them, trees fall, structures fail, and everything catches on fire. Blobs of destruction rain down on every square meter. Ashi helped lead everyone to safety (including a small tip about how water slows down the curse), but it's too late. Irontown, in its familiar form, is no more.

It's kind of like the Prisoner's dilemma, in a way. Both the Forest and Irontown wants what's best for themselves, and they went to great lengths for it. But instead of becoming more prosperous, it ended up destroying both of them. They at least had something at the beginning; In the end, they have nearly none.

But if you look beyond your immediate surroundings, if you consider the whole situation instead of just your side of it, other solutions can appear. Maybe quotas can be set up. Maybe it's just that certain areas are breeding grounds and should be left alone.

The real question is, is it likely to be that way?

Just like in Mononoke, when you're really locked in a war, you're not trying to agree on how the land should be utilized anymore - you're trying to send the other side to hell because you believe they're dimwits, and not even an exposition is going to change that. Us humans are like that.

So, as hard as we are trying not to, someone will inevitably set up camps to defend themselves from "the shitty [insert adjective]".

One article every month. About how I imagined it. BTW, do you like this new site design? Comments are open on the Neocities portal.